What to do when an animal is sold

Written by Rosemary Stone
Updated over a week ago

When animals with IDs are sold, sent to a meat processor, or returned to the owner, you should update their status in Datamars Livestock.

This will mean that:

There are four methods for assigning animals as Sold:

Note: You do not need to update the status of animals without IDs.

Method 1: Uploading a session file containing only the animals which have been sold

If you are only weighing animals which you are selling, or if you scan the EID tags of animals as they leave your farm, you can upload this session file to update the status of those animals in Datamars Livestock. If the session file contains other animals which are not being sold, see Method 2 below.

1. Start a new session file on your EID reader or indicator.

2. Scan or enter the IDs of the animals being sold.

4. On the Actions screen, find the session file containing the sold animals, click on the drop-down arrow next to assign and select Mark as Sold.

5. Select All animals, then Update to mark all animals as sold.

Method 2: Uploading a session file containing a number of animals, some of which have been sold

When you upload this session file to Datamars Livestock you will be able to split it based on this field and update some of the animals to have a status of Sold.

1. Start a new session file on your EID reader or indicator.

2. Weigh animals, ensuring that the animals being sold have data which will allow them to be identified later.

4. On the Actions screen, find the session file you just uploaded and click on the drop-down arrow next to assign. Select Mark as Sold.

5. Select Some animals and then the field you want to base the split on (e.g. Status, Draft, Weight) from the list. 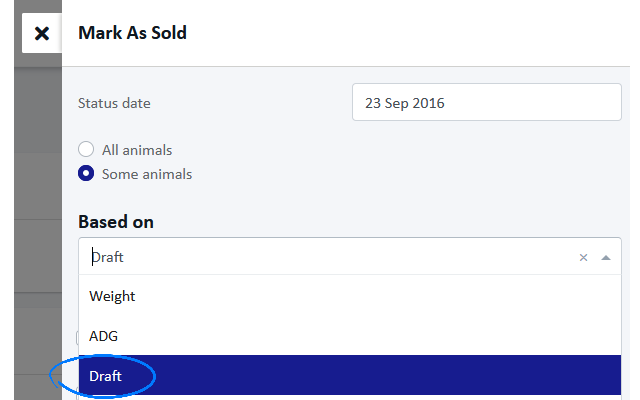 6. Select the animals which you want to sell, or enter a number if selling based on weight. Click on Update.

Method 3: Finding an individual animal by searching for its ID

If you are only selling a few animals and you know the ID of the animals, you can find the animals in Datamars Livestock and update the status of those animals manually.

1. Search for the animal in the Animals, Session Animals, or Group Animals screen.

You will be taken to the Animal Details screen.

4. Repeat the above steps for each animal you want to mark as sold.

Method 4: Finding a number of animals by creating a filter

1. On the Animals, Group Animals or Session Animals screen, create a filter which will return a list of the animals you want to update.

2. Select Update Status and click Mark as sold to mark all animals in the list as sold.

Did this answer your question?